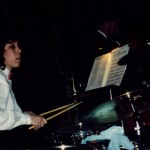 Jenni is one of Long Island’s most prominent percussion instructors. After studying music and graduating from Queens College in 1983, she began teaching and performing all over Long Island and New York.

Jenni has performed with many bands, from small bands to big bands. Throughout the 1990’s, she performed with The Memories of Swing Orchestra, one of Long Island’s busiest big bands.  She was a founding member of the Rush tribute  band “2112”, as well as member of “Tick Tock”, a punk rock band, performing regularly at many iconic New York City clubs including The Ritz and CBGBs. In the 2000’s, she managed the Al Miller Big Band, led by famed clarinetist Bob Dransite, with performances all over the tri state area, including a regular concert series at Lincoln Center.

Jenni has been teaching privately since 1989, and has been the percussion instructor at Kellenberg Memorial High School since 1999.  She teaches all musical styles, specializing in big band and show drumming, as well as NYSSMA and Allstate preparation for snare, drum set, timpani and xylophone. Jenni is proud to be teaching for String Sound Studios.