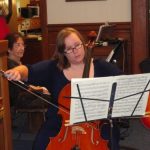 Kelly comes from a musical family, and started taking piano lessons at age 7. At age 9, she began learning the cello, and by age 12 she knew she wanted to be a music teacher. She has studied cello with Robert Davies, Laurinel Owen, Heidi Hoffman, and Elizabeth Simkin. She received her Bachelors of Music in Music Education from Ithaca College in 2007 and her Masters of Arts in Education from Stony Brook University in 2009. Kelly has played in many settings on many stages, including at Lincoln Center and Carnegie Hall, and under the baton of the late great Russell Stanger. She is currently the assistant principal cello for Sound Symphony.

Kelly has been teaching since age 16. She believes that it’s almost never too early or too late to start learning music. She prefers working one-on-one since it allows her to tailor her instruction to each individual student. In her spare time, Kelly enjoys going to concerts, traveling, and cooking. She has been teaching for String Sound Studios since 2010.